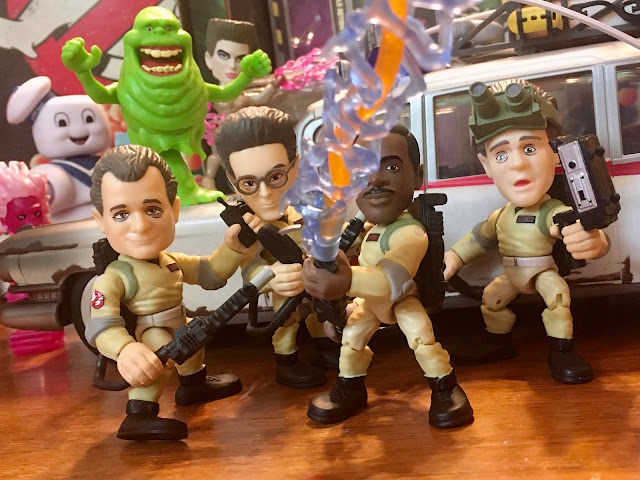 Who would have thought we’d ever reach a point in time where there are too many Ghostbusters toy lines?  As great as the Real Ghostbusters was, my kid self always wanted a true movie line with actor likenesses and all the ghosts.  Now we have at least half a dozen of those in different shapes and sizes…and here is one of those unique sizes with the Loyal Subjects’ Action Vinyls line. 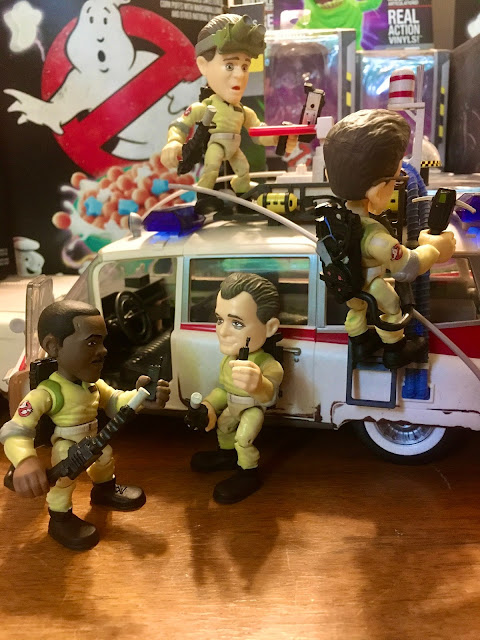 I’ve got a couple of their Masters of the Universe figures, and I have reviewed Hank from King of the Hill.  This is more of the same:  nicely sculpted and articulated, 3inch figures with oversized heads.  I used to love “super D” or “deformed” figures back when they hadn’t been done to death, so I wasn’t exactly knocking down the door to get these at $11-12 each.  However, I jumped on them at a local GameStop sale for $2!  Two dollars!  I would say they are at least worth $5, so that’s a steal!  I even got to keep the display box. 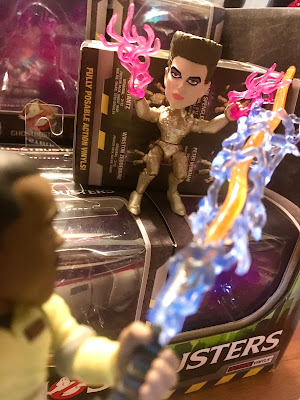 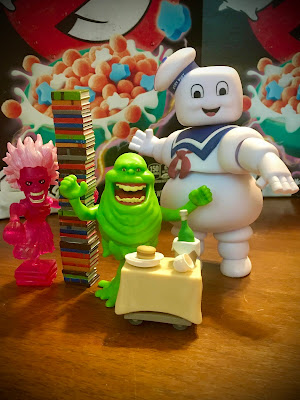 Slimer has a ton of accessories…but, once again, no GB1 accurate butt crack.  Wah waaa!

I was able to snag the four boys in gray, Janine, and Gozer in this sale.  The others, according to the cards, are more rare.  Good enough…but I kept my eyes peeled on EBay.  I picked up Stay Puft from Amazon in the meantime.  As a larger figure, he was separate from the assortment.  Weeks later, one EBay seller had Slimer, the Librarian, and the ultra-rare Dana…at $10 each!  Close to retail price, and I was actually able to complete the line. 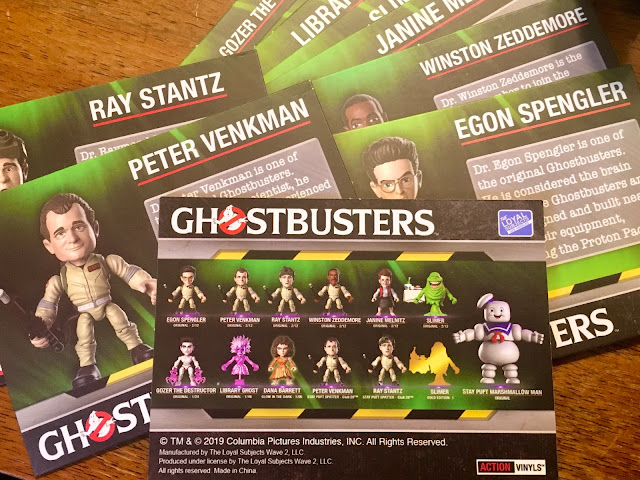 Dana’s rarity pays off in the form of the most awesomely bright, glow in the dark feature I have ever seen!  Are we sure the paint they used isn’t radioactive? 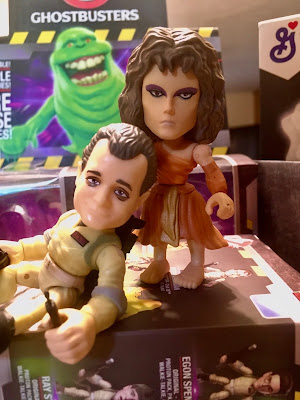 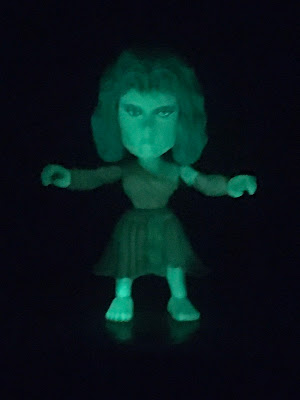 Sadly, I nor Loyal Subjects was able to complete a full lineup.  Old Toy Fair images showed prototypes for Terror Dog, Louis Tully, the Cab Driver ghost, and even a pre-transformation Librarian.  Short of the subway ghost, this could have been the first line to deliver a complete Ghostbusters roster!  Sigh… 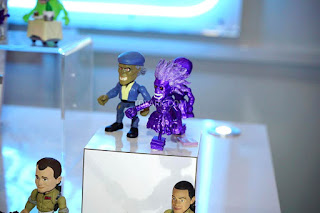 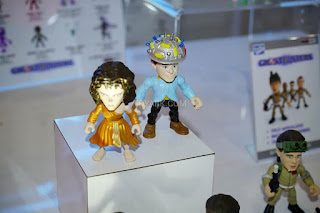 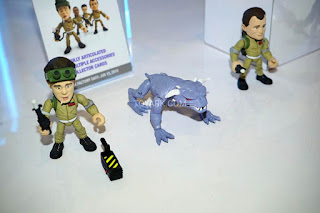 Also, RIP Ray’s cigarette.  Good on Loyal Subjects for the attempt, but the kibosh just leaves Ray with forever-frozen-in-plastic dumb look on his face.

Anyway, they’re still fun to play with and look really nice with the too-small Plasma Series Ecto-1.  Their big heads wont allow them inside (and their packs don’t come off, either), but they still size up nicely and give off a Sega Genesis Ghostbuster vibe.  If you can nab them on sale, go for it! 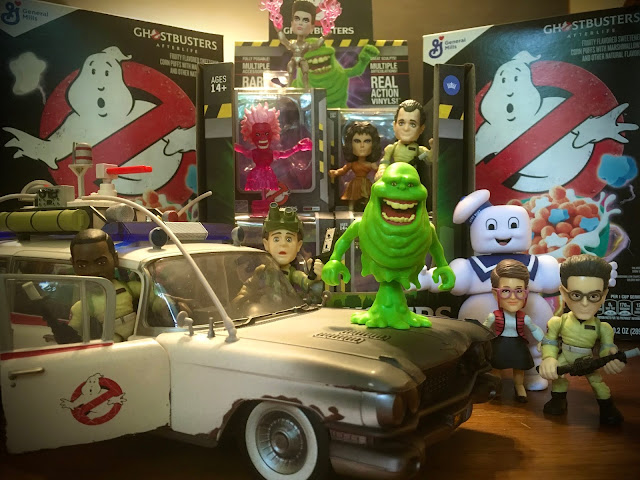 On another Ghostbusters kick, I learned that Janine’s lucky coin from a deleted scene actually exists!  Thanks again, EBay!  If you haven’t seen this cut scene, it’s worth a gander: 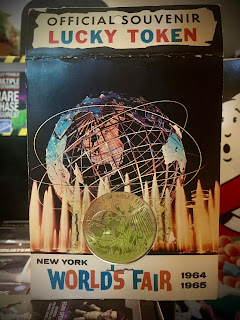 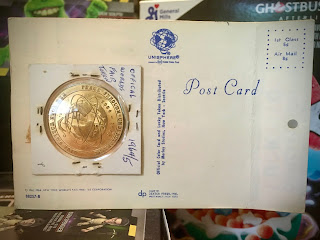 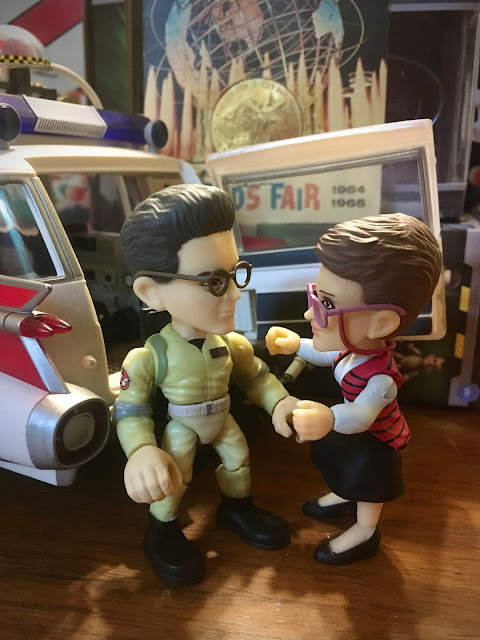 Posted by The Terrible Toyman at 8:43 AM